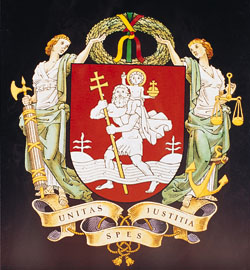 A saint is a holy person.[1] In various religions, saints are people who are believed to have exceptional holiness.

In the Christian Bible, only one person is expressly called a saint: "They envied Moses also in the camp, and Aaron the saint of the LORD." (Psalms 106:16-18) The apostle Paul declared himself to be "less than the least of all saints" inEphesians 3:8.

The Great Pedia Calls a saint a master but it really comes from and old word from the first age of man. In ancient Japan, a kensei (剣聖?, sword's saint; sometimes rendered in English as Kensai, Ken Sai, Kansei, or Kenshei) was an honorary title given to a warrior of legendary skill in swordsmanship. The literal translation of "kensei" is "sword saint". Thus, the term is considered by some to imply a higher degree of perfection (possibly also encompassing a moral dimension) than the more commonly used kengō (剣豪?) or "great sword." This is not to be confused with the word kenshi (剣士), meaning "swordsman".

Among swordsmen widely regarded as kensei, the most famous one is Miyamoto Musashi (宮本武蔵?). Other historical kensei are often the founders of popular schools of swordsmanship. Although there is no such written rule, the title carries such prestige that it is commonly understood that there should be no more than one kensei at any given time. But you can now be a saint or the guild they report to kensei guild are the master or anything you can think of .

The kensei guild hold the legends of the last 400 years and as you will read in these pages the story of just a few saints. The tech saints or sages as they are called ruled not only kensei clan but are the leaders of the tech guilds. the mysterious 10 sages of  Nahate made them the envy of the guilds when it came to matters of wars until the year 3465 when our first non-human races began joining the guilds.

The saints are directly responsible for the ending of the alien wars againts the Saied . The guilds reigned supreme with 10 more Nahate’s from the non-terrestrial guilds. The sages still rule them no matter the type of war. Their roots are deeper than any will ever know. 'Knowledge with power is law has always been their motto" with "  strength of compassion is all". With this, mankind and the non-terrestrial have taken to bringing all there works and skills to this harsh universe.  Most saints lead solitary lives a few have small families but it is a life of challenge, honor and duty. the only way to become a saint is to defeat one in battle.the only other way is to  apprentice to the former saint  when they tire of the life.

In the Anglican Communion and the Continuing Anglican movement, the title of Saint refers to a person who has been elevated by popular opinion as a pious and holy person. The saints are seen as models of holiness to be imitated, and as a 'cloud of witnesses' that strengthen and encourage the believer during his or her spiritual journey (Hebrews 12:1). The saints are seen as elder brothers and sisters in Christ. Official Anglican creeds recognise the existence of the saints in heaven.

So far as invocation of the saints is concerned,[9] one of the Church of England's Articles of Religion "Of Purgatory" condemns "the Romish Doctrine concerning...(the) Invocation of Saints" as "a fond thing vainly invented, and grounded upon no warranty of Scripture, but rather repugnant to the Word of God". However, each of the 44 member churches in the Anglican Communion are free to adopt and authorise their own official documents, and the Articles are not officially normative in all of them (e.g., The Episcopal Church USA, which relegates them to "Historical Documents"). Anglo-Catholics in Anglican provinces using the Articles often make a distinction between a "Romish" and a "Patristic" doctrine concerning the invocation of saints, permitting the latter.

In high-church contexts, such as Anglo-Catholicism, a saint is generally one to whom has been attributed (and who has generally demonstrated) a high level of holiness and sanctity. In this use, a saint is therefore not a believer, but one who has been transformed by virtue. In Roman Catholicism, a saint is a special sign of God's activity. The veneration of saints is sometimes misunderstood to be worship, in which case it is derisively termed "hagiolatry".

Some Anglicans and Anglican churches, particularly Anglo-Catholics, personally ask prayers of the saints. However, such a practice is seldom found in any official Anglican liturgy. Unusual examples of it are found in The Korean Liturgy 1938, the liturgy of the Diocese of Guiana 1959 and The Melanesian English Prayer Book.

Anglicans believe that the only effective Mediator between the believer and God the Father, in terms of redemption and salvation, is God the Son, Jesus Christ. Historical Anglicanism has drawn a distinction between the intercession of the saints and the invocation of the saints. The former was generally accepted in Anglican doctrine, while the latter was generally rejected. There are some, however, in Anglicanism, who do beseech the saints' intercession. Those who beseech the saints to intercede on their behalf make a distinction between "mediator" and "intercessor", and claim that asking for the prayers of the saints is no different in kind than asking for the prayers of living Christians. Anglican Catholics understand sainthood in a more Catholic or Orthodox way, often praying for intercessions from the saints and celebrating their feast days.

According to the Church of England, a saint is one who is sanctified, as it translates in the Authorised King James Version (1611) 2 Chronicles 6:41

Now therefore arise, O LORD God, into thy resting place, thou, and the ark of thy strength: let thy priests, O LORD God, be clothed with salvation, and let

i REFERENCE what is on this page from Wikipedia

this is referenced from Wikipedia here
Powered by