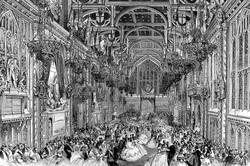 
Nothing is really known about the history of the tech guild. Mostly because they are the only source of history their data stores have all of mankind’s recorded history. They believe all knowledge should be recorded. This is funny because the tech guild was the first advocates against religion .meanwhile they themselves kept the traditions alive. You see every house now represents different religions of old. Only the tech guilders know what the house's names mean.

The guild was there when the religious wars first began. Back then they were just the League of Science and Philosophy. They cited that religion was the first known cause of mass war between men. They themselves could not surrender the knowledge of man after the last wars of man and kept the tradition of their faith alive. Each house now represents a peaceful exploration of god’s laws and values built on faith and understanding leaving the trappings of hate and fear behind. To that end there are no Great Pidea files on the old religions open to the public . The only files never to be on the internet.

The former faith of the human race of earth can be the summed up in the religions of each of the main house. House of the forever Christ was the first to create saints. The house of Muhammad a Brother to Christ made the profits. The Great MOTHERS OF WICCA created the trinities . The Folk Of The Old Way created the Mageye. Shinto of japan created the priest . They embody the ways of thinking philosophy and culture of the old worlds. There are 27 sub houses of the tech guild.

Science is called the word. They belived the universe could be a question and sciences is the answer. Expressed in the words of god law that hold and bind the universes. Most of the elder believe in the Grand Unified Theory. That will link us all but some believe if found, we may never understands it.

THE MAIN HOUSES OF TECH

The mains house of the tech guild are listed as such

The house of the Mohammad

The great mother of wicca

The folk of the old way

The sruti of the smiriti

The  face of rastafari

The brotherhood of Buddha

Each house has its own version or symbols of strength called a weapon.  The saint are noted as the first, the prophets, Israelites, trinities and other followed but these main house are directly responsible for the creation and skills of these avatar’s.  Not really guilds but sub guilds all following one grand master.

The HOUESE all have different rule but one rule they all follow is that they must add new members to their houses every year not of the blood of any other house.  These people are call converts. Converts are the envy of most because to be chosen from the support or other guilds to join a house of the tech guild are rare.  The first non-human to be a convert was Sakaided of Delora.

For a non-human it was unheard of to be called.  It stunned the rest of the houses but as always the house of Christ also known as the trouble makers did things to bend any law put before them without breaking them.  Quoted from an elder, "Always follow the spirit of the law not the letter." This one action created a chain that added new races to every house.  Making them the first and only guild to have people from every other guild amoung there ranks.

The brotherhood of Buddha was put in charge of each house who break laws till they can be trusted the brotherhood till this day is called the fathers of all. The folk use there science like magic are called the all-seeing eyes. Watch over there brothers and all of guilds. While the prophets and saints enforce all breaks that could lead to the first war among the alliances.  The tech guild also created the ai guild to watch over the tech guilds.

The brotherhood hood of Buddhism
The Brotherhood of Buddhism is split between two sub houses the traditional. great school of elders and the more popular The great Vehicle .The elders have become the heart of the tech guild creating the Brothers and the notion of making all tech from all houses easy to use and accessible to the public .The great Vehicle true to its name created a propulsion system that carried the gates twice the speed of light. They are also the one who have  indirectly responsible for the breach and the great war against the hunger.

The elder stepped in at that point and created the brothers a grand master and his followers to atone for the damage mankind has wroth on our galaxy. The brothers were first created to train the weapons each house had created to add alien species that where collected on the way back to earth after the Breach, instead they became the police for these weapons. Even after the war began they were the first house to speak out about the treatment of the alien races and wild life we collected on the way home.  The marine guild how ever saw these creatures as cannon fodder, so began the book of sorrows that the tech guild  created to record the atrocities mankind has created since the war began.

The brothers do not leave the collective that the human have created only traveling to worlds to train and keep watch over the races as they enter our society.  The brotherhood is built to represent their houses belief that all life is precious.  They believe that violence will not solve the problems we have created but life must end Through natural mean they do not use the link or weapons that can kill.  Both sub-houses have shifted their tech to the creation of weapons that are non-lethal, Also they created the non-linear fields also called time bubble to hold, the elders of aliens races added to the war so that after we defeat the Hunger.  We can return as many as we can to there societies and life styles that we found them.